Here I sit with one of the best friends anyone could ever have. Through out the years this sasshole here has been one of my rocks. I love her more than words could ever express. As you can see Lilly is about to pop. I’m impatiently waiting on Miss Ellie to make her arrival. I keep trying to get Lilly to try anything to make herself go into labor. By the time I post this she could have had her, but more on that later.

Okay, why am I posting about Lilly being pregnant? Well, Lilly tried for around 3 years to get pregnant. She tried everything. One day, last year, we were on the phone playing catch up. Sometimes we will go a while without having a real conversation. She told me that her doctor had informed her she was not ovulating. If you don’t ovulate then you’re not getting knocked up. It’s that simple. Her doctor had pretty much given up hope. Lilly was feeling defeated. I had stopped asking about how “trying” was going by this point, because I knew if she wanted to talk about it she would. Lilly needed to talk to someone about everything. About the “you may want to consider adoption” recommendations and the “you’re probably not going to get pregnant” conversations with the doctor. During that catch up call I knew Lilly understood.

I was 20 when I decided to see a new gynecologist. I had been having a lot of issues with my period and went an entire year without one. Clearly I wasn’t pregnant and I knew something wasn’t right. I did blood work and had exams done. At my follow up I was told I either had poly-cystic ovarian syndrome or premature ovarian failure. I had just taken my entrance exam for nursing school and knew enough medical jargon to have an idea of what was being thrown my way. My doctor told me she wanted me to see an endocrinologist for further testing to determine what exactly was going on with me. I constantly have crazy diagnosis’ being added to my list of ailments. I am no stranger to being the difficult patient. In my appointment with the endocrinologist I was told, “You’re the youngest person I have ever seen with Ovarian failure.” Not premature ovarian failure, but ovarian failure. These bad boys had stopped working fast! When I heard those words it was as if all the air went out of that exam room. I couldn’t hear a word he was saying and kept telling myself, “Keep it together damn it! DO NOT CRY! Not here and not in front of him.” From there I was told children were “unlikely” and I needed to see a fertility specialist to determine further. I remember in the elevator ride my mom put her arm around me and asked if I was okay. It took everything in me to choke down the tears and sobs I was stifling. I forced out the words, ” I don’t know.”

I had to wait weeks to see the fertility specialist. I had to have a ridiculous amount of blood drawn beforehand. I had weeks to try and prepare myself for the worst. My sister, Devon, went with me. The experience I had with that fertility specialist was AWFUL!!!!! Keep in mind, I am 20 years old and in the last 10 weeks I had found out all my hopes and dreams of  having children were quickly fading away. That doctor was insensitive, rude, and nonchalant. He told me in his office, ” All of your levels are low or non-existent. You aren’t producing eggs. Your ovaries are small. The chances of you ever getting pregnant are less than 0.1%.” Just like that. No cushion for the blow. Devon started in asking all kinds of questions. Attempting to get more information and detailed answers. I didn’t hear a word they were saying. I was repeating to myself, “Don’t cry. Don’t cry. Don’t cry.”

The whole way home I stared out the window. Devon tried talking to me and I can not even remember what about or if I was responding. That news, that diagnosis, those words still echo in my mind. They haunt me. The depth of the wound those words created is not something I can explain. It is not something you can truly understand until it is you. The kind of pain that comes along with it. Gut wrenching doesn’t even begin cover it. Possibly it’s soul crushing? It changes you. It isn’t something you ever get past. You accept it over time. You learn to live with it. I have to explain it to people more than you would think. “Oh no I can’t have kids.” They tell you oh you can try invitro or hormone injections. NO BOBBY SUE I CAN NOT! People don’t know how to react and always want to give you advice. I know it is a natural response. I get told how sorry someone is for me. Having someones pity is equally upsetting. Then there is the factor of dating. I feel obligated to immediately tell someone if they start showing interest. I know that for some it can be a deal breaker. They want to have their own kids. Hell it was a huge deal breaker in my last relationship. He was fine with adopting when we first started dating, but over time he decided he wanted to have his own children. After 4 years he told me that even if we would’ve worked past all our other issues, “It would never work because you can’t have kids. I thought I could get past it, but I want my own flesh and blood.” In that moment I may have thought about murder or crawling into a hole and dying.

I have slowly come to terms with the possibility that I may never be a mother. Do I want kids and a family? HELL YES!  I would give ANYTHING to be able to grow a child inside me, experience birth and raise kids. Kids that have my eyes or my laugh. Be able to make my sisters an aunt. Letting go of that dream has been one of the HARDEST things I have ever had to do and I have overcome a lot.

So, Lilly calls me and is talking to me about her journey with infertility, because I understand. I know what she is feeling. You feel as if you have failed as a woman because you can not do the ONE thing women are supposed to do. I realized while talking to her that someone, I love and who loves me, finally understood what I was/am going through. Finally! Now, I never wanted for anyone to be able to understand. I do not wish infertility on any woman. It was comforting to be able to have a conversation with Lilly and not have to try to explain myself. We sat on the phone and had a lengthy conversation. I listened while she vented and I tried to give her the best possible advice I could.

Fast forward to February of this year. I am at work and Lilly calls me. Lilly knows I am at work and wouldn’t call unless it was important. I dip away to answer, a little concerned, and Lilly asks me to sit down. “Madelyn,  I am pregnant!” Hearing those words and the immediate wave of shock mixed with happiness. I cried tears of joy. Once we hung up it hit me. Lilly was no longer in the boat with me. I felt sad in a way. I sat in the bathroom and cried for myself. Every time a friend or loved one tells me they’re pregnant, I am overwhelmed with joy. Of course I am happy for them. Its later that the envy sets it. There is a slight tinge of jealousy and then self pity. I let the tears flow when I am alone. I don’t mean to be envious, jealous, or have self pity. I don’t want to, but sometimes you just can’t help it. Once I “cry it out” I am fine. I watch them experience pregnancy. The gender reveal, the nesting, and the birth. It is such a beautiful thing. Lilly’s pregnancy has been different for me than my other friends. It has been a little more personal because of what we shared and what she went through to get here. 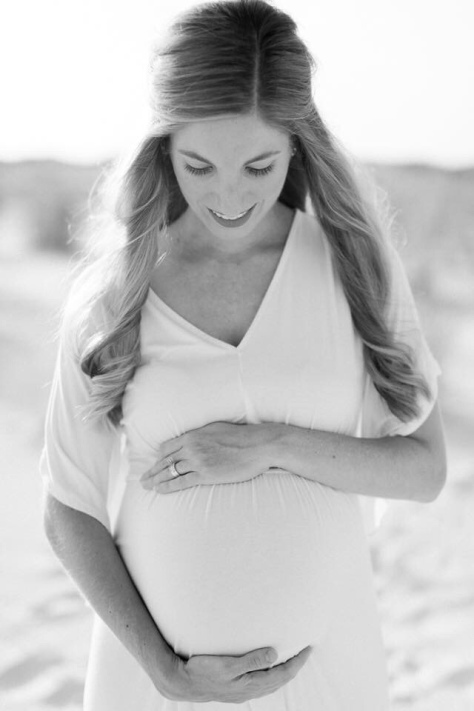 And now she’s just waiting to hold Ellie in her arms.

Infertility is devastating. To all those women whom are struggling to get pregnant, whom have had miscarriages, whom are going through hormone therapy, and whom are coping with the diagnosis of infertility….YOU ARE NOT ALONE. It’s okay to feel defeated, to feel like you failed, to feel sorry for yourself. It is okay. Take it one day at a time. Process it in your own way and at your own pace. Just remember that while it hurts, you will be okay. You’re stronger than you know.

7 thoughts on “Babies, pregnancy and infertility…”

Song of the week-

A.M Radio by: The Lumineers

A look at the author: